The architecture of the Thimi area shows unique Newari influences. A stay in Thimi will take you back in time where the lives of the mainly Newari townsfolk are different from anything you have probably seen in the western world. You won’t see many other westerners in Thimi, so you will be noticed wherever you go. That can be disconcerting at first, but just say “Namaste” a couple of times and see how welcome you are made. 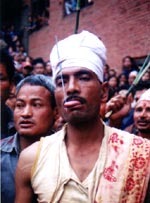 English is generally the third language for Thimi people. Their first (and for some, their only) language is Newari, and Nepali is their second language. In spite of that, it is not difficult to make yourself understood in the town as everyone, it seems, wants to practice their English whenever they see a westerner!

The school is located in the old part of the town, where many families carry on pottery making in the traditional way, by hand. Others work at carpet weaving, both in factories and with home looms. There is a thriving handmade paper factory not far from the school. Most families have small farm holdings, growing their own vegetables, fruit, rice and wheat. Some of them sell their excess produce along the streets of the town early in the mornings. Others have shops which they operate at the front of their homes.

Walking through the streets of the town past these tiny stalls and shops is always fascinating, as the local children say ‘Namaste’ and practice their English with “Hello, how are you?” and giggle at your response. There isn’t a supermarket, but you can buy most of the things you’ll need during your stay if you know where to go, and the locals go out of their way to assist you any way they can.

Thimi is primarily a Hindu community and temples are plentiful, some in the centre of a road, and there are also a few Buddhist temples. An early morning stroll will reward you with sights of the townsfolk taking their offerings to a temple, buying bread, milk and vegetables, and generally starting their day’s activities. Go a few minutes further out of the town and you’ll soon find yourself passing small farms where people busy themselves all year round with their neatly planted crops.

If you run out of things to see in Thimi, visitors can easily take day trips to the ancient cities of Bhaktapur and Patan; venture a little further and you can get magnificent views of the distant mountains from Nagarkot or Dhulikhel. For more information refer About Trekking or Click here

Gatha Mugah (August)
After rice planting people clean their houses, clothes and themselves. Incenses is burnt. People make a large symbolic body of the demon (Ghantakarna) and take it out of the town and burnt it. The people have good feast together and have rest with their family for whole day.
Saparu/Gai Jatra (August/September a day after full moon)
This festival is related to the souls of dead people. On this day people believe that the gates of the heaven open to let the souls of dead people pass through. The relatives of a dead person walk in a traditional procession with either a cow or a symbolic cow in memory of the dead person to make the Indra (King of heaven) happy. The streets of the town are full of crowds with masks and funny dresses. Various traditional cultural dances like “Bhaila”, “Mahalaxmi” are performed in the different places of the town for three days.
Dashain /Mohani (October)
This is the main Hindu festival of Nepal. It lasts for two weeks, during which time barley is planted, goats, cocks and ducks are sacrificed and there is a lot of feasting.
Tihar/Swanti (October/Noverber)
Also known as the festival of lights it is also the celebration of Newari New Year (Nepal Sambat) and it is a very happy time. Celebrations last for five days.
Yomari Punhi (December/January)
This is the post harvest festival and delicious yomari (steamed cake of rice flour stuffed with a mixture of sesame and molasses) are eaten in this day. For seven days you may see man in masks parading through the streets and dancing.
Pulukisi Jatra (February)
On one day in February a hollow elephant is made in which men hold it and carry a person in disguise of a king. They go on procession around the streets with musical instruments being played.
Shree Panchami (February)
On this day Saraswati, the Hindu goddess of learning, is worshipped. Buddhists also worship Manjushree on this day.
Holi Punhi (March/April)
On the main day of celebration people play with water and color and roam around the streets.
Bisket Jatra (April)
Bisket Jatra is the most spectacular festival of Thimi. It runs for 3 days. Many tourists come to Thimi to participate in the colorful festivities. These include parading statues of gods and flaming torches to the sound of ancient beating drums, throwing of the vermilion powder and tongue penetrating festival.

Make a difference, become a volunteer. Teach subjects such as English, Craft, Community Health and Administration. Other possibilities could be discussed. We share experiences through volunteering and exchange programs.